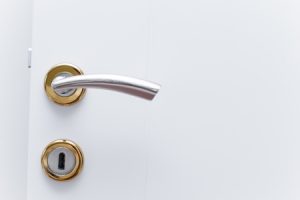 JC Security handles all sorts of locks. When you think of locks, do you ever think of their various functions? Did you even know there are different types of locks, with terms like cylindrical, mortise and ‘exit devices?’” You can learn a lot about locks if you’re interested.

Now about the functions… there are generally five well-known functions of locks, including passage, privacy, entrance, classroom and storeroom.

Regarding passage, there’s a latching mechanism involved that can be retracted by both an inside and outside lever at all times. With a passage door lock, keep in mind that the door lock function is never locked. There’s no key or locking mechanism on either side of this door… so basically this “lock” is really a “latch.”

Now it’s on to the entrance lock function, whereas there’s a key involved, used to get into buildings or rooms within buildings such as offices. A key is used to lock/unlock the outside lever. The inside lever is always free. The key operates the latch in this case. The door can be locked from both the inside and outside trim (unless the outside lever is locked by a button on the inside).

For classrooms, the lock function works such that the outside lever is locked/unlocked using a key. But, unlike the entrance lock function, there’s no button on the inside. The inside lever is always free so people can “get out” when they want to leave the classroom.

Finally, there’s the storeroom lock function; its outside lever is always rigid and can’t be unlocked. Either a key is used on the outside trim or the latch is retracted by the inside lever (which is always free to “get out”).

If you need help with the with the locks for your home or commercial property, contact JC Security today.

← Can a Locksmith Replace a Lost Car Key?
Signs It’s Time to Rekey a Door to Your House or Business →