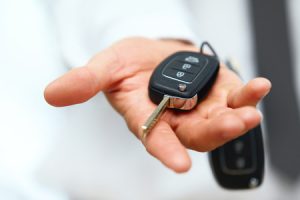 What’s the difference between laser cut and traditional cut car keys? If it has been a while since the last time you had keys made, you might be surprised to find out how much technology has “taken over” in the key world.

An Overview of Laser Cut Keys

Today you’re likely to find a lot more laser cut keys on the market. They’re commonly called internal keys or sidewinder keys. You’ll know you’ve got one if you take a look and notice they’ve got a constant depth down the middle, making them thicker and more sturdy than traditional cut keys. Meanwhile, there’s an indentation made on the key, equally on both sides, so that the key can be inserted and the engine will start no matter which direction the key is put into the ignition. Hence, that’s why they got the name “internal key.”

Laser cut keys made their debut in the 1990s in high-end vehicles. People liked them because they added security– they couldn’t be easily duplicated! Indeed, laser cut keys need special equipment to be duplicated. They are harder for thieves to try and use to pick locks. Also, you might notice laser cut keys have transponder chips in them– the chips are programmed to work with the specific car or truck. If the normal and proper transponder chip isn’t in the vicinity of the receiver, then guess what? The vehicle won’t start. This is a valuable security feature.

An Overview of Traditional Cut Keys

Have you ever had that scary moment when you checked all the pockets of your coat, shirt and pants only to not find your car key(s)? Losing keys happens to a lot of people– even the most conscientious ones. Though it may initially seem like “all hope is lost,” there’s always a way to get… END_OF_DOCUMENT_TOKEN_TO_BE_REPLACED

Did you recently lose the only key that you had for your car? You might be incredibly worried about whether you’ll be able to drive your car again. You rely on your car to get you to work and to drive your family around, so not having a car for an extended period of time… END_OF_DOCUMENT_TOKEN_TO_BE_REPLACED

In the old days, people had keys. Nowadays, it’s more likely they have “fobs,” which typically involve pressing a button to lock/unlock a vehicle. Sometimes the fob also includes a key on it. No matter what you use to get into your vehicle, it’s a smart idea to have more than one key or fob… END_OF_DOCUMENT_TOKEN_TO_BE_REPLACED